Last month, we continued our examination of HOA Horror stories about roaches, bedbugs, and rats. This week, we 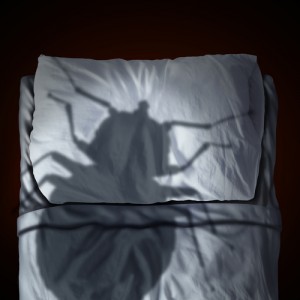 delve into the dirty bedbug problem plaguing the entire nation.

According to a recent report issued by the US Department of Housing and Urban Development, bedbug infestations have become a serious problem in housing throughout the country. In recent years bedbug infestations have increased dramatically in all 50 states, reports the National Pest Management Association, which tracks the little critters. In 2000, bedbugs were a growing problem for only 25 percent of pest-control professionals. By 2010, a new survey found the pest experts were treating the bedbug epidemic 95 percent of the time.

Bedbugs thrive on human blood. They hide until they hunt for nourishment, which they typically do under cover of darkness. Amazingly, these pesky night biters can go for a year without food. You may not even know you have them until you wake up with small red welts on your skin – often three in a row. They will bite anywhere, but prefer soft spots on the body such as the inner arm, stomach, neck, breasts, or behind the knees.

Pest-management experts say bedbugs are on the rise because people are traveling more often to exotic locations and some are bringing them home. Bedbugs are especially attracted to environments inhabited by large numbers – their primary food source.

The environments they seek not only include condominiums and cooperatives- both luxury and modest – but apartments, hotels, hospitals, and assisted-living centers. They are equally fond of fitness center gym lockers and department store dressing rooms.

Scratching at the Problem

Take the case of the condo renter who woke up one morning with what looked like a few bug bites. She contacted a doctor friend and he said they looked like bedbug bites. The concerned renter spoke with her landlord, and an exterminator and he instructed her to look for signs of bedbugs (markings on sheets and shell casings), none of which were present. The exterminator said without such evidence, it’s difficult to tell if bedbugs are present and it might take at least a month to find such things.

“He gave me the number of a dog scene service,” the renter said, “Dogs can trained to locate live bedbugs when they are not visually present.” The renter asked the dog service to come out to check the apartment. “The owner of the dog service said the animal sensed bedbug activity in one corner of my box spring, but nowhere else in the unit. He could not, however, find any physical evidence, but he did believe- consistent with the bites I had received and the dog’s indicators – that there were bedbugs in the unit. He believed the infestation was very early and said it could be just one or two bugs.”

Not wanting to wait or let the problem worsen, the renter asked an exterminator to come and spray the entire apartment, and a second treatment was also scheduled. “I have also taken the additional precautions of washing and drying all of my linens and clothes in the entire apartment. The good news is that since they sprayed, I’ve had no new bites,” she said.

Bedbugs travel easily from unit to unit through electrical outlets, under baseboards, and across hallways. They hitchhike on luggage, clothing – and even pets. They do not distinguish socioeconomic classes.

The good news is that they won’t kill you and they don’t transmit disease. The bad news is that they do cause health problems, such as varying degrees of skin irritation due to itching, and can cause allergic reactions in some people, which may lead to secondary infections. They may also cause stress, anxiety, and insomnia.

As an owner of condominium or a cooperative, it is your duty to immediately inform your board of directors if you have the slightest suspicion that bedbugs are present. Just one week is a virtual eternity of breeding in the bedbug world. The board must quickly conduct its own investigation. Ultimately, it has the legal responsibility and duty to deal with the issue.