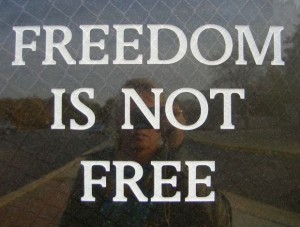 In 2012, Retired Sergeant Daniel Lister, his wife, and two children were thrilled to be the recipients of their 2-story brick home in Chandler Grove Homeowners Association, Gwinnett County, Georgia. The home had been donated by the Military Warriors Support Foundation and Bank of America.

Four years later, Lister finds himself embroiled in a battle with his HOA over where he kept his trash can when, as an amputee, he was only able to get around with the use of his wheelchair. A stack of violation letters from his HOA also cite violations about his fence and edging of his lawn.

But when you watch the video below, you won’t see anything unsightly in Lister’s yard. Whatever issues might have existed at the time, it appears the homeowner has addressed them. Lister explains that, at the time of the violation letters, he was recently discharged from the Army, and recovering from his injuries and PTSD. He was also a first-time homeowner raising two daughters. A few maintenance tasks fell through the cracks. The trash can had to be placed where he could access it easily from his wheelchair.

Now, as reported by Fox5 Atlanta, Lister faces liens on his home, placing Lister at risk for foreclosure by Chandler Grove HOA.

Retired Army Staff Sgt. Daniel Lister did four tours of duty: first in Iraq, then Afghanistan, but he is now in a big fight with his homeowners association after they put a lien on his property. His days of fighting aren’t over yet. He said the HOA forced him to pay thousands of dollars for not keeping his house up to regulations.

I was curious about Chandler Grove HOA’s regulations, so I looked them up on their website.

Here are the trash can guidelines.

I’ll let the reader decide if these guidelines seem reasonable or a bit over the top.

As for my opinion, let’s just say that I would not consider lawn chairs, tables, and patio furniture as “debris,” even if they are placed on the front lawn. And, personally, I don’t see the requirement that trash cans be placed on the curb after dusk to be reasonable, especially if a homeowner happens to have poor night vision or some other type of disability.

This is one picky HOA. And this story should highlight the importance of any home buyer – or tenant – reviewing these rules, regulations, and guidelines prior to moving in. If if means you walk away from the deal or a lease, so be it.

But, in this case, Lister was gifted the home. So I doubt there was a full disclosure that included a review of HOA governing documents prior to handing him the keys to the house.

But, of course, the additional risk of buying into an HOA is that those rules can and do change after you close on the sale and move in. And, like it or not, you’re obligated to follow the new rules or face the consequences, which could include fines or other penalties issued by your HOA, up to and including having a lien filed on your property and even losing your home to foreclosure by the HOA.

Now, in Lister’s case, I suspect there’s a potential Fair Housing issue at stake, whereby the HOA ought to be making a reasonable accommodation with regard to placement of the trash can. That’s a whole other legal battle that could take years to fight.

And for what? If you have watched the video, can you see anything at all dangerous, disturbing, or offensive about Lister’s property? Is there anything to justify thousands of dollars in fines or the threat of losing his home?

I just don’t see it. And I have to wonder what’s really behind the HOA’s decisions and actions.

So now Retired Army Veteran finds himself, once again, fighting for freedom. But this time, that fight is on his own home turf.